Megan and Bach landed on the carpet of pink and purple flowers. Like the world she had left behind, the sky was blue, but that was where the resemblance ended. Rolling hills covered in flowers were rudely interrupted by a series of cliff edges that dropped down hundreds of feet to the sea.

Megan picked a flower from the carpet. She touched the large purple petals with wonderment. Each was as soft as velvet. At the heart of the flower was a set of smaller pink petals, that gave out the most delicious smell Megan had ever encountered.

“I don’t believe it,” said Bach pointing, “look over there”

On the top of a nearby hill Megan saw two fairies chained to posts. Both were weeping copious quantities of tears. A Dragon was leisurely walking up to the posts. Small puffs of fire were coming from his mouth. 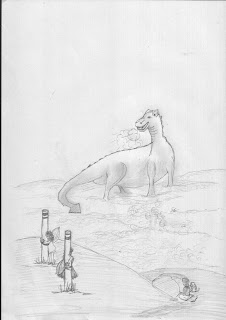 “How awful, he’s going to eat them”

Without thinking Megan raised herself into the air once more. Flying straight to the post she landed behind the fairies. Taking out her wand she tapped silver cord that bound their hands to the post. At once it uncoiled from around their wrists.

The fairies vanished, but the dragon was still approaching. That was when Megan remembered Bach’s warning about not making them angry. Surely if anything was going to make one angry freeing its dinner would.

That was when she noticed how up close dragons don’t look anything like they do in books. Mortal artists had done their best to portray dragons but somehow they had made the dragons look a little bit cuddly and lovable, despite the pointed teeth and the fire coming from their mouths. Nothing could have prepared her for the sight that was now advancing on her and Bach at speed. Close up each of the dragons brightly coloured scales flashed as he moved, with the sharp edges catching the sunlight. The teeth looked more menacing than she had ever seen in any other creature before. His face was covered with scars and along one side there was an open gash still gently weeping slimy blue blood.

Bach was now by her side. “I guess we are for it now” he whined.

“Who let those Fairies go?” The dragon’s voice rumbled through the valley like a thunderstorm.

Megan took a step forward and pushed Bach behind her.

“I did,” she said as politely as she could.

“Why?” the dragon’s voice dropped even lower.

“Because I didn’t think that anyone should have to be eaten by a dragon.”

Megan took a deep breath and continued “I don’t mean to be rude but they are so small that they would hardly make a meal for you and well… I don’t think that being swallowed by a dragon would be a nice way for anyone to end up, let alone a little fairy.”

The dragon sat down hard. It cocked its head to one side and stared at her.
At last it began to chuckle, a chuckle that turned into a laugh and it laughed for a good long time. Eventually it looked at her again.

“What makes you think that I won’t eat you?”

The dragon chuckled again. “Well said little girl,” he pointed to a patch of ground near him.
“Sit”

“I suppose you have heard all sorts of stories about how dragons are fierce creatures who like to eat people who are rude to them and devour maidens tied to posts.” He continued without waiting for her to nod.

“I suppose it would surprise you to hear that all dragons are vegetarian nowadays?” he paused and looked at her closely  “Dragons have been vegetarian ever since my great, great, great grandmother decided to make a feast of various fairies and goblins etc. She tried her hardest to make it a splendid occasion. She invited all the dragons in the world and when the meal was brought out we realized to late what her plan had been.

The silver lids were lifted off the platters and out of each one rose a fairy with a wand pointed at the dragon who was about to eat. They cast a huge spell on us all. Now any dragon that eats anything other than a plant or vegetable turns to stone and does not eat anything until the spell wears off.

It turned out that my great, great, great grandmother had made a bargain with the queen of the fairies. Dragons would become vegetarian and the fairy queen granted us our own lands to grown our food on. (Dragons eat quite a lot you know.) So the Dragonlands were born. This land is separate from the rest of Fairyland so that we can do what ever we wish. Officially we are still under the rule whichever fairy queen is on the throne but no one really takes much notice of that.”

The dragon paused reflectively to catch his breath.

“I did try once when I was younger, to eat a goblin I found, tying up a fairy to a post just like this one and I ended up being a statue for nearly 20 years.”

Megan smiled at him “May I ask your name?”

“Treetop” replied the dragon. “I was coming over here to set those fairies free myself you know. That sort of thing happens quite a lot. Those pesky goblins still believe that we will devour anything they tie to those posts. So they bring any fairy that upsets their mischievous plans here, to dispose of them.

Unfortunately I was putting up a shelf when the goblins responsible for today’s fairies ran past me talking about it at the top of their voices. I dropped the shelf awkwardly and it tore this hole in my side.”

Megan looked closer at the wound then over at Bach who nodded at her.

“Would you mind if I had a go at fixing it?” she asked the dragon “I am a bit new at this whole spell thing but I might be able to help”

Sure enough in front of Megan’s eyes, the wound was slowly but surely closing, the flesh knitting together and the blood drying up.

He stood up and reached into the branches of a nearby tree. Plucking some strange looking fruit from the top he passed them down to Megan and Bach. Opening hers Megan found that the flesh was a deep blue colour. Bach’s was more like crimson.

“I think that you will like these,” said Treetop.

Megan and Bach thanked him properly as they had good manners. Sure enough in a short while the fruit soon disappeared. Treetop fetched some more while Megan and Bach took it in turns to explain why they had come to the Dragonlands.

Treetop scratched his head. “I think that it would be best if I gave you a ride on my back to the Fairyland border. You both must be very tired by now. This way you can have a bit of a rest. After that you will have to be on your own.”

He looked at them sharply “I don’t want you thinking that I am offering to do this because I am a tame dragon or a wimp because I am a vegetarian. You can’t boss me about. I am doing it because you showed yourself to be brave when you set those fairies free and because you were polite and said thank you when I gave you the fruit. I am doing it because I like you and would like it if you would be my friend.”

Megan put her arms up to hug him “I would be honored if you would be our friend.” She declared.

Bach climbed up the dragon’s tail until he reached a place where he felt he could curl up and go to sleep. Megan fluttered up and chose a spot at the base of his neck.

Treetop flew high in the air. Passing over the land that changed from pink and purple to blue and through yellow and green he never swerved from his course. Scattered below were dragons going about their business. Growing crops of beautiful flowers seemed to be the chief concern of the dragons down below. Some of the dragons were so old that they were as big as a block of flats. Many of them waved as they saw Treetop. Megan and Bach slept soundly never noticing the wonders that passed beneath them until at last they landed. Megan reached up and hugged Treetop’s scaly neck.

“I will never forget you,” she said with a catch in her voice “I will tell everyone that I know that not all dragons are scary”

“Don’t be doing that. We would never be having any peace and quiet,” Treetop said with what sounded like a purr in his voice. “But you can come back and visit anytime you like and bring that troublesome leprechaun of yours as well”.

They hugged again. Then Megan and Bach turned and crossed the boarder in to Fairyland.

Posted by Emmelina Audigier - Emmylva at 14:41 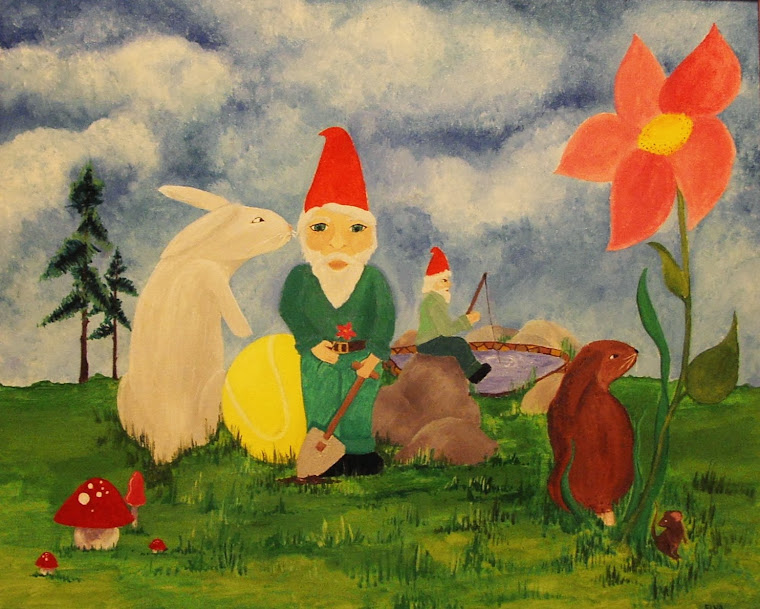 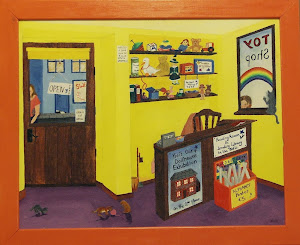 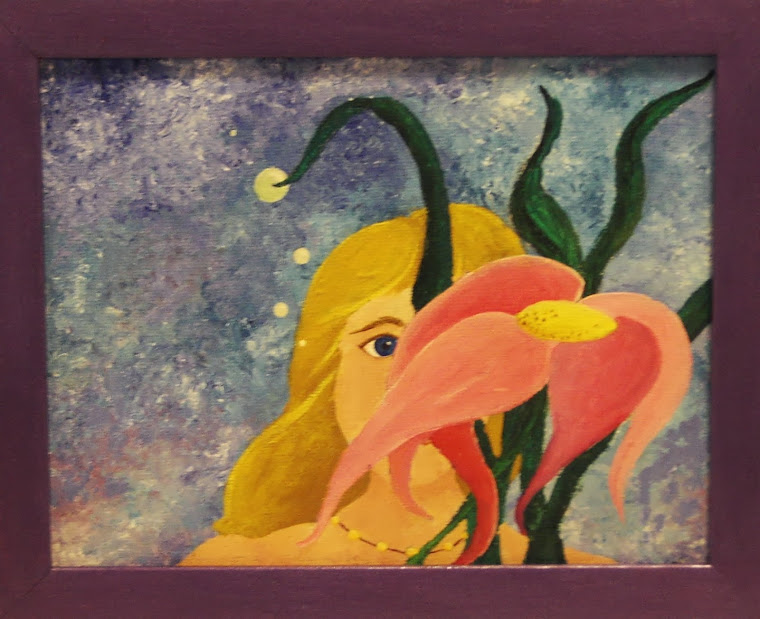 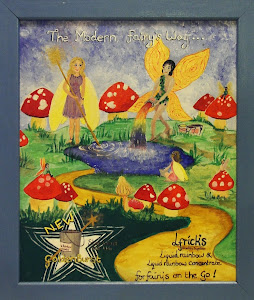 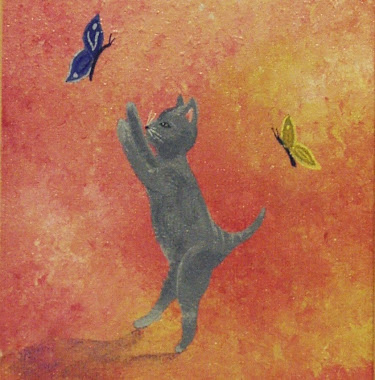